The Duke Siegfried Memorial Knights and Magick game was a huge hit. There were miniatures on the table that have not seen battle for 2 decades, and others that I finished at midnight last night. Still love these rules- but man what a slug fest! 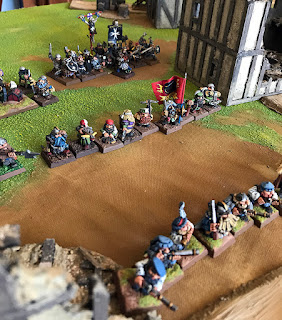 The scenario was pretty straight forward. The undead had taken this village last year, and the local Baron ( played by my Wars of the Roses Warwick mini by Front Rank) and his retinue were coming to try and take it back, helped by some dwarf mercenaries.

Knights and Magick rules system works on a matrix where you cross reference the weapon used against the armor of the target and get a number, which you then roll a D15, aka a D10 and a D6 and must score lower to gain a hit.

Morale plays a big "old school" part int the game, with pre charge checks and counter checks for receiving. Higher morale also gives you +'s to hit, which really made a difference for the Humans.
( the alive ones, anyways) 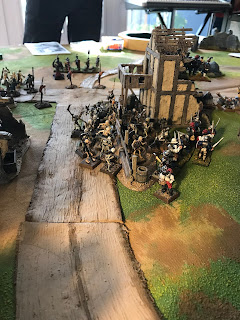 When we called the battle both sides had been mauled and had lost their generals. The undead forces were mostly on the run or were being cut down.  All in all a fantastic day. Thanks again for my friends for coming and playing, and my fantastic wife for being a super hostess.