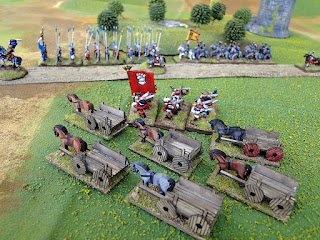 So, I play Warmaster more often than any other table top system. It has a certain elegance to it, and I enjoy the command and control- plus the fact that at any moment your flank can be sucking wind - which means you have to come up with a new plan to deal with it. It supports and rewards both daring and conservative gameplay styles, but only to a point.

For those who've never played Warmaster, here's a blurb from Wikipedia:

Warmaster is a ruleset for tabletop wargames written by Rick Priestley, published by Specialist Games (a division of Games Workshop), and set in the Warhammer Fantasy setting. It is different from Warhammer Fantasy Battles in both appearance and gameplay. It is intended for 10 –12 mm miniatures.[1] Basic troops are based on stands, of which typically three make a unit. Generals, Heroes and Wizards are mounted individually or with their retinue.
Gameplay focuses on command and control. While magic is used in the game, its effects on the game are limited. The game is designed to focus on the general's ability to command rather than just the armies ability to fight."


Some folks don't like the randomness of its game style, but I think that is what makes it the most challenging - the most "real", if you will. How many histories have we read where a division or even a corps didn't show up ("Where is Grouchy!")  Or an impetuous and glorious charge that, after hacking down a couple of crossbow units, leaves you kinda stranded next to your esteemed opponents organ guns...

Aside from the "classic" fantasy Warmaster, I also play a variant of Napoleonics that I've cobbled together. If I ever get my armies painted, I'm ready to do Romans and Britons.

What's This Got To Do With Wagons?

Back to the point of this blog: while playing with my friend Simon this last month, we were getting too used to each others' tactics to go head-to-head, so started playing the scenarios found in the back of the rule book. One of those scenarios is to protect the wagon train.

Well, neither of us had any wagons, so I made some. After work that night I sat down and did some quick mock-ups, ran them on the laser cutter, painted them and had them back on the table (replacing the dice markers) for Simon to find when we resumed our battle at lunch. As it was my orcs raiding the wagons, it was especially sweet capturing them. **

As a big convention was coming up (Dundercon), I cleaned up the model, sprued it and then passed them out to my pals. 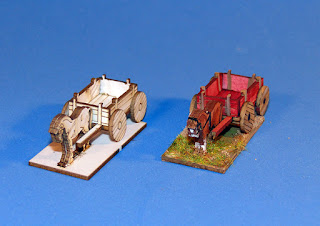 The design is a simple cart, where you can leave the front and back off it you want. The base is a standard 20 x 40mm Warmaster base, and the horse is scaled to suit 10mm. I did the first drafts on some old mat board I had and really liked the thickness and how it all came together - plus super easy to paint. No reason to make these out of wood, so I'm now sticking with the quality mat board.

It still needs a bit of finalizing, like the horse's base sticks out too much, making him crowd the wagon a bit, and I might put tabs in wagon bed for the side boards, but otherwise it's ready to go. 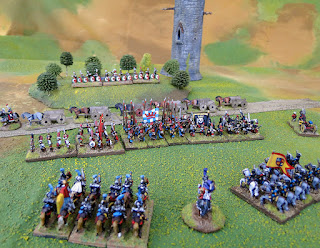 How can you get some? I'm glad you asked!

UPDATE- ALL WAGON'S HAVE BEEN CLAIMED-

Thanks so very much for the great feedback and emails.
For those of you who didn't make it this time, I'll be doing more of these giveaways. Why? Because I love seeing folks play with my toys. Simple as that!

Eventually I'll put these and a few other 10mm bits and bobs up on my webstore, but for now
I've got 20 wagons sitting here waiting for good homes. I'll post out 2 wagons to 10 of my beloved bloggy-readers; I only need your address. Yes, even you in Tasmania! You can either add your address to the comments, or email me at woodenwars1815@gmail.com, just put "10mm wagons" in the subject.

** Side note. Most all of my gaming buddies are one-uppers. That is to say, you bring an orc biplane with crossbows on the wings to a game and the next time they bring an elephant with a ballista and call it a PAK gun. I love that rivalry - it brings out the best in us all.