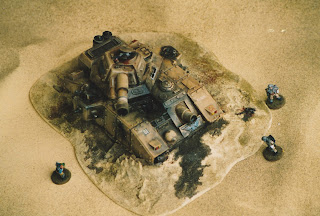 Blasted from the Past


I found this picture while digging through some old boxes. Back in the early 90's I managed to score some mis casts from my friend Tim DuPertuis, owner of Armor Cast. I think I traded him some of the Bunkers I made for them.

I made 4 terrain pieces from the bits I got. A bunker made out of a Reaver Titan carapace, a reaver arm in a crater,  a reaver gun with some built up area, and this knocked out Ginormous baneblade tank.

We used to game at our local game store, Gamescape, and I had all of these pieces in the display case there.  One day I got a call from Dianna, the store manager. Robin Williams had come into the store and liked all my pieces and wanted to buy them!  I had met Robin a few times previous to this, as we both lived in the Castro district at the time. By now, he had bought his house in the Sea Cliff area (a really cool, yet posh part of San Francisco).

After talking a bit, We settled on a price and picked them up. Later, Robin commissioned me to paint up a set of commissars for him, which I delivered to his house. I got to see some of his eldar collection, which was vast!

I hope that Robin had fun playing with these pieces. I'm not sure what happened to them. Someone on FB said that his daughter Zelda was posting pics of his toys and asking questions about what they were, so maybe they will pop back up.