This past Saturday I ran a 10 person tournament using my somewhat soon to be published Breaking Lances rules at Dundracon game convention. It was well attended with over 18 players signing up! This is a real coup, as DDC is mostly a role playing and board game con, with lots of LARPing going on around and in between. 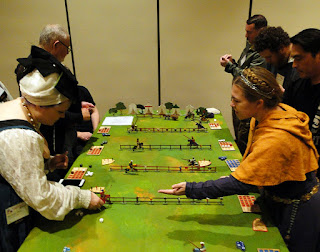 With the amount of players I kept the first rounds single elimination, with a couple of players held back for bi rounds and outlyers. Everyone got the rules in the first course of their jousts, and I think fun was had by all.
I totally forgot to get the name of the winning knight- no doubt some noble that was slumming at my tourney, but remember he won with a score of 6 points higher over all than the 2nd place opponent.

As Saturday's tournament went so well, and there were many that did not get to play, I opened up the lists for Sunday as well. This table had 3 jousting runs, and cycled through 12 players in all. 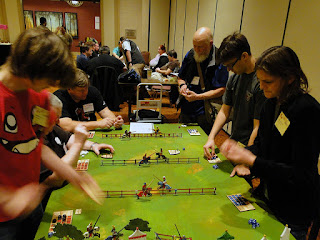 When can I play Breaking Lances?

Good question!  This tournament weekend proved to me that not only are the rules working, and the added layers of complexity (such as the optional "flourish" rule) can be added or subtracted with  no hitches, but that folks actually want their own knights and set ups. The only changes that came from the weekend was a clarification on a "Favor" you can win, and upping the crit severity when you get really bonked on the head.  Yay!

I had a lot of folks as if I was going to make this a kick starter. That would make a lot of sense and get good press, but I think that I'm for now just going to get it ready for launch on my webstore. The rules are now in the hands of my editors, and I have enough toys to take good pictures for the rules, so now it's really a matter of time on getting all the ducks in a row. Luckily most of this part is out of my hands, as my Triumph of Death Kickstarter coming out soon, causing a bit of juggling of my time

So, stay tuned, if you really can't wait for a release I'm happy to sell you sets of Breaking Lances ( I sold 11 "pre-launch" sets at Dundracon), send you a beta version layout of the rules  and post you the real set when they come out. just ping me and let me know.

For lots more pictures of Dundracon, including more of my game and an awesome refight of Pickett's charge, swing on over to my pal Jay's Wargaming Madness Blog


As always, I look forward to your feedback
Cheers 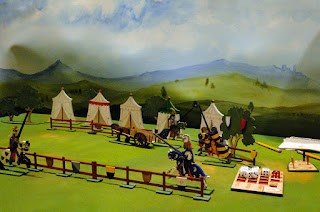