Of Ships and Space and Sealing Wax...

Continuing to build all the parts for my upcoming Kessel Run Race game,
Last time we covered the Summa-Verminoth and the Tie fighters, so this time we'll finish up with the other parts needed for the game.  As always, I need to make a list of things to check off so here's the current list.
Game table mat- aka the  race track
Correlian  Freighter ships on stands-with dice holders
Asteroids on stands - Foam and wood bases
Tie Fighters on stands with dice holders - acrylic
Gun sticks - cut from acrylic
Summa-Verminoth Boss monster
D6's (have these)
Rules


I first started with a basic shape, because the size of the thing and the structure of how it would work on a stand was really important. These things have to stand up to game play, hold the right amount of detail, and not crowd each other as I have a finite size that the race track could be.   I first did drawings on paper scanned and made a few scale sizes in photoshop- then cut them out and played with them for a bit to see what would work best. Paper prototyping, or cardboard is a fantastic way to play around with the pieces and get a good "real world" feeling for the piece.

After I got the size I wanted, I needed to really make a ship that looked like the Millennium Falcon. Luckily there are tons of wonderful blue print type layouts on the internets; I found one I liked and used it to draw over using Lasercad- the vector drawing cool I use for my laser cutter. 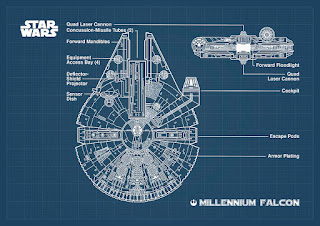 The trick was choosing which lines and details would work best to make it read well. As I only had one  night to build it out, I made my choices and then cut out a bunch of ships. Pretty happy over all, but once I started painting ships, there were detail lines I wish I would have put in- and will at some later date ( I literally have one ship with red pen lines showing where I want to make changes).
Next I painted the bases gloss black, and lightly primed the ships white. Then painting time with acrylics- and done!  As you can't see the bottoms of the ships, they have no detail other than an extra piece to support them on the base. 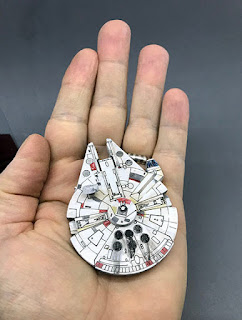 The asteroids are standard foam. I cut them with a knife, shaped them with a hot glue gun, then painted them with a dark black/brown mix of house paint mixed with a bit of Golden course pumice gel to give the outside some more texture. When dry (takes 24 hours). After that a bit of drybrush with grey and some raw umber. Bases are laser cut base and dowels, rattle canned gloss black.

The Track
My game play space is two fold out tables from Costco, which measure roughly 4 x 6 feet when put together. I've made a stretcher bar to fit my table, which I use to stretch canvas over when painting my gaming mats. For the Space mat, I had a piece of black died canvas, that would work perfectly.
The track is made up of move spaces, each 2 inches x 4 inches. I used 2 inch wide painters tape and had my apprentice (son) cut the pieces. At the start point I made fancier cuts to match the ship bases, just for fun.  The nice thing about the tape was I could move pieces around very easily and change the layouts, put some ships on it, see how it felt, move and adjust as I wanted.  Once I had them all down, I took my iron and set it to medium heat then pressed the tape flat ironing it- holding a board on the other side of the canvas for an ironing board.

Then I took the canvas out into the back yard and using black, grey and rust red spray paint commenced to paint out the worm hole style track.
After that, I used a blue grey, white , dark blue, red and orange acrylics to paint over the areas. The paint I used was very wet, almost like a stain. lots of flicking the brush to make "stars". By the time I was finished it was dark, and I was doing this in the back yard with little light, so was not sure how it would come out.   Over all I'm pretty happy with the results!

Once that was dried we peeled off the tape exposing the canvas underneath. I unstretched it and set it up for some play testing.

That's it- other than going over the rules. I'll do that after I get the game going, and figure out a way to get the rules so you can down load them yourselves if interested.

Thanks again!  let me know if there is anything I did not go over well enough. Note- for some reason blogger won't let me comment/reply to my own blog, so I'm not being snobbish, just a tech dork. :)