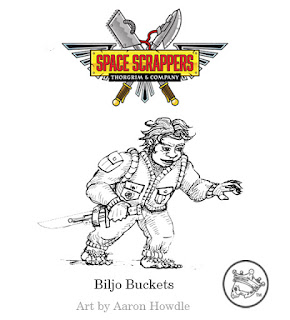 Biljo Buckets was a janitor on an Imperial Heavy Cruiser. As a Halfling he could dodge most everyone (and his job) on the ship, often ducking into small places or travelling through air ducts. Most of this exploration also involved petty theft, mostly in the form of food from the galley. During one of these adventures Biljo  fell into a sanitation reclamator, almost killing him- but as he scrambled out he saw something shiny on a ground a ring- a famed Jockero ring. This particular ring was not outfitted as a weapon, but instead creates a chameleon like field around the wearer, rendering Biljo almost invisible.

One day Biljo saw servitors loading supplies and food onto an attached Rogue Trader ship- he snuck on, and fell asleep, only to wake up with an angry looking dwarf standing above him. After some parlaying, Biljo has signed on to Thorgrim’s company as the official burglar and scout.