“Mahound is in his paradise above the evening star,
(Don John of Austria is going to war.)
~ Excerpt from Lepanto,G.K. Chesterton, 1874

Galleys Guns and Glory
On Sunday at Kublacon this year I “premiered” my Galleys Guns and Glory! (GGG!) rules and models for the general public. Previous to this I’ve run several play tests at my local South Bay Game Club and at during lunch time play test sessions at work (we have a rocking game room at Cryptic Studios- with enough for 4 miniatures games, a foosball table, ping pong table, and of course the full on couch and video game set up- I love my job!) but this was the real deal.

Getting ready
Due to work and life constraints, I was busy painting and making flags or gluing awnings up until the latish hours of Saturday night, because- sexy game needs.  I recruited help from anyone who hovered around me too slowly (thanks Stanley and John!) to help cut out flags or glue them onto pins or sort out the models to make sure my count was right.


The Set up
The nice thing about a sea battle is there really isn’t that much set up- compared to say an AWI game.  I got the ships out, placed and crewed in about 20 minutes, thanks to my pals for helping me pull things from boxes and getting me induced with caffeine (yay Peter!)
Players started arriving about a half an hour before the game started at 9 am, which gave lots of time for looking at models, talking with everyone, answering a few questions and handing out rules ahead of time for perusal.  Around 9 am we started with a full complement of 8 players- plus 3 more who joined in and commanded ships in a battle which other players were nice to

The forces!
share. As we added in players, I tossed in a few extra ships with a force count of the Turks with 19 ships, the Venetians 13. The disparity in numbers was balanced in that the Turks had a much higher number of galiots, whereas the Venetians had three lanterna galleys to the Turks one.  Was it balance?  Probably not, but what battle was? It sure looked good ( and was all the models I had ready to go).


The battle- and a bit about the rules
As this was a first time out game, I wanted to keep the scenario simple so it was a full on Turks meet Venetians off the coast kind of dust up.  The story was that the Lanterna’s held lots of goods, and the Turks were out to intercept.  Nobody seemed to complain and the objectives were pretty clear.
GGG! works on an activation system, where at the beginning of each turn (and after all cannon reloads are checked for) the commander places an activation number for each battle, hidden from their opponent. Then initiative is rolled for, and the first activation on each side is revealed, with the winner of the initiative going first.   This system is fun as not only does it give a bit of hidden activation in what is otherwise an open game, but it also means that by turn 3 the commanders are vying for top activation by the commander. Bribery is not unheard of. J
So- the Turks won initative and used it to start a fast flanking maneuver with galiots crammed with corsairs on their right flank.  I think the Venetians began in the center with the lead Lanterna heading straight for the Turks flagship.


The crash of oars!
By turn 4 most all the line had crashed into each other in that way that it looks in all the paintings of the battle of Lepanto.  To be honest, as the game designer, that was my entire goal of this game to recreate that look and feel of battle in the era of the renaissance galley- and it makes me smile that it actually worked.  Well, maybe not my entire goal, but definitely a pillar of the rules system and the model designs.

Back to the battle; as previously mentioned the Turks controlled the right flank firing point blank into the Venetian ships before boarding them and sweeping all before them, but not without taking some casualties.  They quickly claimed all the captured ships as prizes and started getting ready to move to help of the center.
In the Center the Turks lost a lot of boarding crew to cannon fire at medium ranges, then again at short  range- as the Venetians were able to reload their guns- like a BAUS!  (in the rules, Venetians get a better chance of reloading guns, as they had better trained crews, guns, and well- more money!)  The Turks made up for it at close range with a deadly rain of arrows and ramming, which caused loss of crew to the Venetians, and knocked them off their feet – losing them attacks in melee.  Again the Turkish zeal and good dice rolls won the day.

Venetian Zeal on the Right flank
On the Venetian right flank, the battle commanded by the honorable S. Stinnett ( a French mercenary captain what took to ships, ergo his personal fleur-de-lis tokens) was unstoppable. The Turks barely got within medium gun range when two of their ships were sunk out right by cannonade.  by the end of the fray a lonely Turkish galiot survived, and her captain tried to actually surrender, but the zeal of the Venetians had taken them into a fury, and the poor Turk was not spared.  His ship was then towed by the Venetians as a particular prize.

Victory to the Turks!
I can’t honestly remember how many turns the game went (I think it was 7), but at point in the game we took a look at who owned what. Although the Venetian right flank was almost intact, the Turks had control of the center and left ( their right) and although thin in boarding crew on many ships, outnumbered the Venetians 2/1  and had one galley filled with Janissaries ( who get better melee attacks in boarding).
We decided that at this point the Turk owned the seas and the Venetian right would get away with plenty of prizes while the Turks looted all their captured ships.

Rules Review
This game from start to conclusion, including teaching the rules to all new players took 2 and half hours.  During the game, I posed questions regarding how a system was working for players, was it clear, and did they have any suggestions on ways to improve. I got a few key great feedback ideas, which I am incorporating; the key one is to standardize all to hit values to the same numbers for ease of remembering.

If any of you out in blog land are interested in a beta version of the rules, I’d be happy to send you a version.  Just send an email to woodenwars1815@gmail.com  and put Galleys Guns and Glory in the subject header.
If you provide feedback, you get your name in the playtesters section. If you make me do a palm slap to my forehead when I read your feedback (as in “Dhoop! Yeah, that was broken) I’ll send you a ship!
Cheers and thanks! 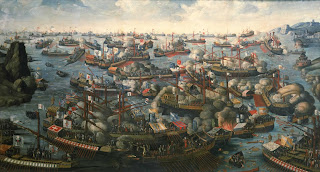